The small form-factor pluggable (SFP) is a compact, hot-pluggable optical module transceiver used for both telecommunication and data communications applications. The form factor and electrical interface are specified by a multi-source agreement (MSA) under the auspices of the Small Form Factor Committee.It is a popular industry format jointly developed and supported by many network component vendors.

An SFP interface on networking hardware provides the device with a modular interface that the user can easily adapt to various fiber optic and copper networking standards. SFP transceivers exist supporting SONET, gigabit Ethernet, Fibre Channel, and other communications standards. Due to its smaller size, the SFP has replaced the gigabit interface converter (GBIC) in most applications; the SFP is sometimes referred to as a Mini-GBIC. In fact, no device with this name has ever been officially defined in the MSAs.

SFP transceivers are available with a variety of transmitter and receiver types, allowing users to select the appropriate transceiver for each link to provide the required optical reach over the available optical fiber type (e.g. multi-mode fiber or single-mode fiber). Transceivers are most often designated by the standard transmission speed on the medium (e.g. 1.25 Gbit/s for Gigabit Ethernet or 10.3125 Gbit/s for 10 Gigabit Ethernet), but sometimes they are labeled with their nominal Ethernet speed or a higher speed the manufacturer specifies. SFP modules are commonly available in several different categories:

The enhanced small form-factor pluggable (SFP+) is an enhanced version of the SFP that supports data rates up to 16 Gbit/s. The SFP+ specification was first published on May 9, 2006, and version 4.1 published on July 6, 2009. SFP+ supports 8 Gbit/s Fibre Channel, 10 Gigabit Ethernet and Optical Transport Network standard OTU2. It is a popular industry format supported by many network component vendors. 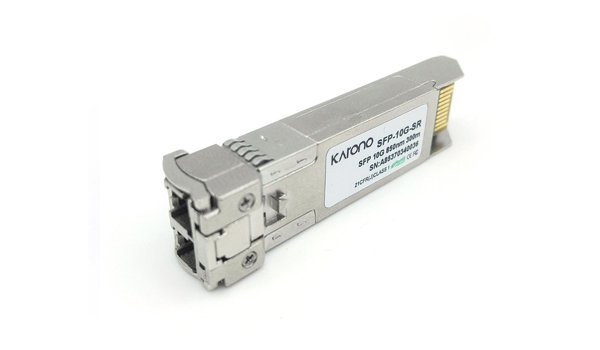 In comparison to earlier XENPAK or XFP modules, SFP+ modules leave more circuitry to be implemented on the host board instead of inside the module. Through the use of an active electronic adapter, SFP+ modules may be used in older equipment with XENPAK ports.

SFP+ modules can be described as ‘limiting’ or ‘linear’ types; this describes the functionality of the inbuilt electronics. Limiting SFP+ modules include a signal amplifier to re-shape the (degraded) received signal whereas linear ones do not. Linear modules are mainly used with the low bandwidth standards such as 10GBASE–LRM; otherwise, limiting modules are preferred.

SFP28 is a 25 Gbit/s interface which has evolved from 100 Gigabit Ethernet, which is typically implemented with 4 × 25 Gbit/s data lanes. Identical in mechanical dimensions to SFP and SFP+, SFP28 implements one 28 Gbit/s lane(25 Gbit/s + error correction) for top-of-rack switch to server connectivity. SFP28 may also be used to “break out” a single 100GbE port in a top-of-rack switch into four 25 Gbit/s individual server connections. SFP28 functions with both optical and copper interconnects.